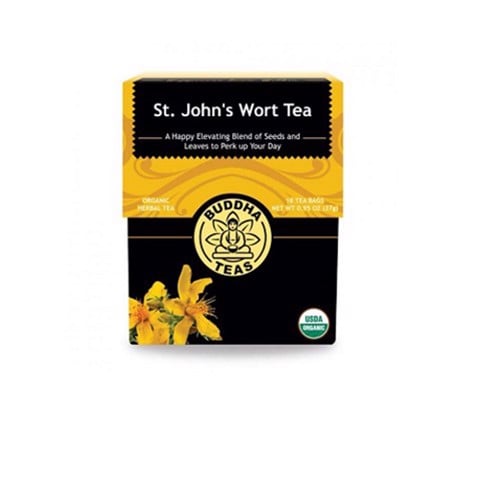 St. John’s Wort has gained its reputation as the “happy-making” herb, and is often prescribed by health practitioners the world over to ease a heavy heart. But, there's so much more to this beloved herb, so open your mind and get ready to delight in St. John's Wort Tea.
Works as a pre-bedtime relaxant
Known to decrease cyclical hormone issues
Flavonoid rich

In the Know
For centuries, and especially in Europe, St. John’s Wort has been used to alleviate the often debilitating symptoms of depression. Even though the results of studies tend to be inconclusive as to its efficacy, those who believe in it its power remain dedicated users of St. John’s Wort.

What Exactly is St. John’s Wort?
Named after St. John the Baptist for various reasons, St. John’s Wort is an incredibly hearty and self-sufficient plant. This flowering herb sprouts yellow petalled clusters and loves to spread its love. Able to infiltrate seemingly unfertile territory, due to its toxicity to cattle and sheep mid-20th century agriculture saw northern California and southern Oregon borrow an Australian species, the leaf-beetle, to gobble up the invasive plant. Today, those who utilize herbs to help alleviate physical and mental ailments often use St. John’s Wort when they know their happiness quotient could use a boost.

Health Benefits of St. John’s Wort Tea
St. John’s Wort has gained its reputation as the “happy-making” herb, and is often prescribed by health practitioners the world over to ease a heavy heart. However, there’s no need to cement your mind on this attribute, for this beloved herb offers so much more.

Lends joy during the dark winter months
Reputed to lessen cyclical hormone issues
The perfect bedtime companion
Contains antibacterial properties; applied topically can ease suffering of some skin conditions
Contains flavonoids, thus elevating its status even more
Handles a variety of stomach complaints
What Does St. John’s Wort Tea Taste Like?
With a soothing, light amber color, just gazing into your cup of Buddha Teas St. John’s Wort Tea will commence the calm. Rather earthy, slightly bitter, with a lingering kiss of sweet, if you didn’t know you were drinking an herbal tea, you might think to limit yourself to cups before noon. However, don’t do it! Our naturally caffeine free St. John’s Wort Tea brings all the groundedness of a quiet moment resting aside a forest’s lush path, while elevating itself with a tinge of fruitiness. All in all, our St. John’s Wort Tea brings a delightful option for those seeking to boost their mood, as well as their tea drinking experience.

Thank you for your interest in Nam An Market products!
Nam An Market will inform you as soon as available.
https://namanmarket.com/products/tra-huu-co-st-john-wort-buddha-27g-346